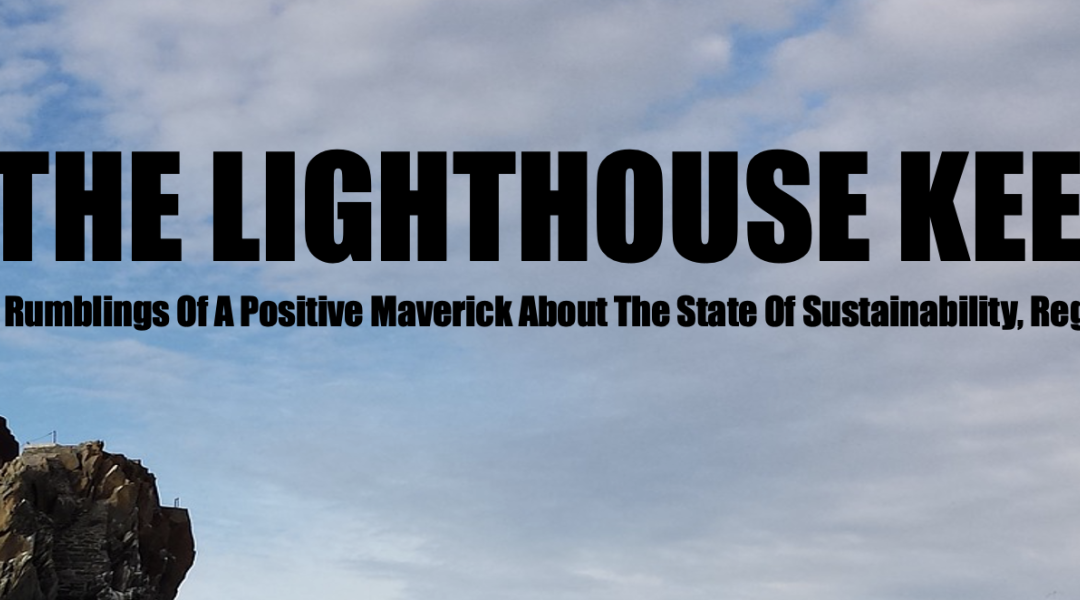 Mapping the Sustainability Standards Niche … IFRS vs. EFRAG … ESG vs. Doing Good … and why do we think that arsonists are good firefighters?

Thank you all for great feedback on the first edition of the ‘Lighthouse Keeper’. There is lots of interest for a ‘compass that guides us through the mist’, as one of the respondents said. The Lighthouse helps to find the shore without crashing against the visible and invisible rocks, the Keeper keeps an eye on the passing ships. My take on all described below stems from the back-casting from an ideal we need to necessarily reach – a regenerative & distributive economy -, and by that standing on the other side of the muddy waters of our current unsustainable economic system design, using the light of the Lighthouse to identify potential crashing against the rocks and letting the siren ring where needed. Well, let’s start this second edition with some necessary mapping then.

The Center for Sustainable Organisations did all of us in the ESG and sustainability field a big favour by pulling together an overview of Non-Financial Measurement and Reporting Standards & Frameworks, identifying their contribution to sustainability through context (in the form of thresholds and allocations), the big theme that caused me to write the ‘Big Sustainability Illusion’ 4-part series in February. The last two columns of this map capture the non-sustainability focus of most of the so-called ‘sustainability’ standards and frameworks, simply due to the lack of sustainability context.

You can find this list online here, together with some glossary, legends and links.

Let’s not forget that the push for context demand thresholds AND allocations. The Future-Fit Business Benchmark helps us through the first step, same as Science-Based Target setting (if methodologically done right, see the first edition of the Lighthouse Keeper for an update of that and the formal complaint against SBTi). That leaves us with the current UNRISD project (Sustainable Performance Indicators now in piloting phase with two dozens of organisations, a list of context-based indicators to come out by end of year), the Multicapital Scorecard and the Social Accountability International Triple Bottom Line Certification Program. GRI, having set the foundation for context through its very own ‘Sustainability Context’ Principle, lacks enforcement and therefore can’t be counted as fully context-based. The WEF initiative with the big 4 accounting firms (also called the BIG 5 by some), at least acknowledges some context-based metrics, but there are very few, and most of the recommended disclosures don’t recognise context. That’s it! The Lighthouse Keeper says: “Lots of homework still to do, but luckily there are some initiatives that have embarked on this path. Take a closer look at them.”

IFRS vs. EFRAG – dead on arrival for sustainability?

While one approach is international (IFRS), the second one focusses on Europe, but it is remarkable that for the first time ever, there is real interest in the integration of non-financial measures into the core financial frameworks. But, as always in my considerations, the major question is: are we going to achieve (more) sustainability?

Prof. Carol Adams pulled together very useful information in a recent blog, containing the following table as a starter, and then comments on their potential. Here’s her table:

She continues: “The IFRS Foundation have been silent on several key matters that the EFRAG report further commits to. This includes EFRAG commitments to:

I am fully supportive of her assessment on the IFRS approach (with links to her own research): “The IFRS Foundation approach is not sustainability reporting. It will not address sustainable development and will (according to research) almost certainly hinder it.”

Where I am not following Prof. Adams’s consideration is her claim that EFRAG, due to the different focus – as explained in the table and below – would indeed make a useful contribution to sustainability reporting. And for that I recommend everyone to do the same check that I normally do when I consider anything making a useful contribution to sustainability: does it recognize thresholds and allocations as the necessary building block to respect carrying capacities (in all fields regarding ecological, social and economic performance) and accepting the need of a ‘fair share’ of allowed capacities? My result, going through the 228-page EFRAG report is…I come up rather empty handed.

There are ten mentions of thresholds in the whole text, but they remain uncontextualized to thermodynamic realities and ethical norms (no wonder the search for ‘carrying capacity’ doesn’t come up one time), and the 8 mentions of allocations only deal with financial resource and capacity allocation, but are unconnected to ‘fair shares’ of remaining resources defined by thresholds. The EFRAG approach is a continuation of a politically-biased muddling through, or as many would more generously say ‘a step in the right direction.’ One could say ‘well, that was their mandate.’ And to be fair, a stakeholder-based approach and recognition of science-based targets are necessary for defining carrying capacities (when methodologically correct and built into a rock-solid governance structure, which is the focus of the formal complaint at the moment). But a simple link to the SDGs doesn’t replace the need for properly defined sustainability context, as only a couple of the 246 targets are actually connected to context, the majority simply is not. Honestly, I think EFRAG did what it was able to do in the light of the wobbly EC set of definitions (see my comments on the EU Taxonomy in the first edition), but will it make a proper contribution to ‘sustainability’ reporting? Well, no, it helps continuing ESG Progress reporting. The use of the word sustainability reporting isn’t justified and should be revoked.

In the discussions with experts that I had in the last week, one comment from Center for Sustainable Organisations Founder Mark McElroy deserves recognition: “The EU’s and EFRAG’s commitment to ‘double materiality’ is nonsense. Not only is it not context-based in any way, it assumes that there is widespread agreement on it as a generally-accepted sustainability accounting principle, when it is nothing of the kind. When did we all agree on it? We did not! These kinds of unilateral declarations of deeply problematic principles are the antithesis of sustainability. They do nothing but strengthen the foothold of incrementalism, not to mention shareholder primacy. Imagine the uproar that would follow if this sort of thing were taking place in the area of financial reporting. People wouldn’t stand for it!” Something to ponder over!

ESG Ratings vs. Doing Good – when arsonists pretend to be firefighters?

A recent article by Hargraves Lansdown Equity Analyst Sophie Lund Yates, called ‘FTSE 100 – the 5 highest ESG rated companies’, created quite some hick-up responses on Linkedin. I sometimes find it amusing to follow these debates, as they show how serious discussions happen in the area of uncontextualized sustainability, without naming the biggest problem at all…uncontextualized sustainability! These discussions are a continued showcase of the cognitive dissonance in ESG LaLaLand.

Says the article: “We’ve looked at the five most highly ESG rated companies in the FTSE 100, according to Refinitiv data. The results might surprise you. It just goes to show that those wanting to invest with ESG in mind, don’t necessarily have to exclude any one type of investment.” So, who are the top 5? AstraZeneca, GlaxoSmithKline, British American Tobacco, Glencore, Coca Cola HBC. Reactions went from ‘this is a joke’ up to ‘this rating does exactly what it was supposed to do.’ A Responsible Investor Article took up some of what it calls ‘ESG Myths’ by headlining: “Refinitiv’s inclusion of tobacco, pharma and mining in ESG ‘top five’ divides opinion – Top-five ranking by London Stock Exchange Group-owned data provider branded a ‘joke’, but others say it highlights myths around ESG.”

One of the most revealing conversations was kicked off on Linkedin by Matt Moscardi of Free Float Media, saying” “The problem isn’t the list. The problem is the ESG community. We love to harp on standards – how much we need them – and data – how bad it is – but are we really demanding a new kind of ‘ESG group think’? Don’t we already have that in traditional financial metrics? I lived through this for 10 years at MSCI Inc., being told our list was wrong or our data sucked. But we created. And we had our reasons. I’m guessing the same is true of Refinitiv, an LSEG business, Sustainalytics, ISS | Institutional Shareholder Services, and Truvalue Labs, a FactSet company or your own ‘prop’ ratings. You do NOT HAVE TO AGREE with the ratings, lists, or reasons. You have to KNOW them, be creative, and make informed decisions.”

Triggered by another comment that ESG Ratings are decoupled from doing good, Matt responds: “I think that’s the point actually – ratings weren’t uniformly designed for ‘doing good’ (at MSCI, they certainly weren’t – it was always about risk). And ratings providers can’t control how funds then subsequently market. Funds often (routinely) misunderstand the ratings (I know, I spend my time consulting with them). But then, how many ‘value’ or momentum’ funds are just beta cloaked in marketing? I like to think it’s all ‘washing’, just depends on your entry point.”

The discussion ponders on and on through (by now) more than 60 comments, but strikingly there is consensus on one thing: it’s all the buyer’s fault if they buy a certain rating, and then are surprised by the results or misinterpretation of the recommendations. A whole niche industry shows their frustrations and licks their wounds, but none of them asks: are we actually doing the right thing? Is a restriction to ESG risk delivering sustainability, shouldn’t we not be interested to proactively progress towards that goal (remember, a lot call themselves sustainability ratings, rankings or indexes)? Could we progress altogether by not fighting over individual methodologies, but for instance adding thresholds & allocations to company performance in order to be able to contribute to sustainability, and not just risk reduction? Not one of them asks these questions…sadly!

In the light of these discussion, the interested reader may then not be surprised about more striking consequences of certain results of ‘ESG Investments’, based on ESG ratings. Here is just one example: “ESG investment favours tax-avoiding tech companies – ‘Dark secret’ of the sustainable strategy is its unintentional support of intangible assets over humans, analyst argues”. The article says: “ESG funds are unconsciously worsening the social and political crisis associated with automation, inequality and monopolistic concentration,” said Vincent Deluard, global macro strategist at StoneX, a New York-based brokerage. “I doubt that the unfolding crises of the 2020s can be averted if the ESG movement’s ultimate effect is to funnel more money into tax-avoiding tech monopolies, pharmaceutical giants with few workers, and financial networks,” he added. “Despite its noble goal, ESG investing unintendedly spreads the greatest illnesses of post-industrial economies. As ESG ratings increasingly determine the allocation of capital, we must pay attention to the kind of companies they reward.”

Finally a quote by Omar Bradley that sums it up for me again and again: “It’s time to be steered by the stars, and not by the light of each passing ship.” If ever the ESG bubble would understand the deeper meaning! So much incrementalism could be avoided, so much progress could be made.

More to come soon in edition 3 of “The Lighthouse Keeper”. Stay tuned and become a positive maverick, too. Humanity depends on you!

Edition 1 of the ‘Lighthouse Keeper’ can be viewed here. And if you missed Ralph’s 4-part series ‘The Big Sustainability Illusion’, start with part 1 here.