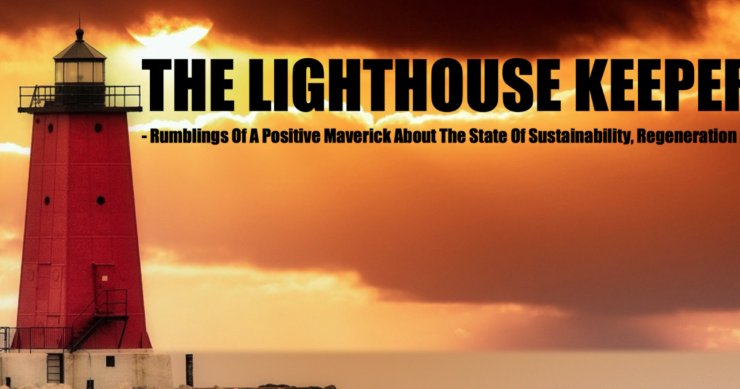 So, COP 26 is over, and while incremental steps are sold as successes (‘never before we had’ … blahblahblah, ‘so far we didn’t have, but now have’ … blahblahblah, ‘money, money, money … blahblahblah ‘China and US collaborate on’…blahblahblah, ’30 countries agree on’ … blahblahblah), the devastating thing is: too little, too late, based on blurry words that are opening up all sorts of escape routes, pandora’s boxes and excuses for non-doing. No end of coal, no end of fossil fuels, no end of deforestation, I could keep going.

COP 26 will go down in history as a technological and financial sector pipe dream, ignoring a coming minerals and metals resource crisis, not allowing the necessary scalability of renewable technologies to effectively help us to stay below 1.5 degrees, supported by governments that were forced to keep wording ‘bloody business as usual’ and not allowing to rethink our killing economic system status quo at all, we continue to sub-optimise procrastination. The fact that fossil fuel lobbyists were allowed to enter in big numbers, while the voices of the next generation and indigenous people have again been kept out and ignored, is telling. And has any of our beloved billionaires offered finance for the ‘real deal?’ Of course not.

The 1.5 degree climate target is effectively out of the window, that is now totally clear if there isn’t an immediate revolution and boycott on massive scale, and that I don’t see coming either, as the current players keep us strait-jacketed and hand-cuffed at the same time. I recommend to watch Chris Packham’s 8-minute summary, a conservation filmmaker who was in Glasgow. I couldn’t say it better, and won’t repeat anything he says below.

Based on my ‘Lighthouse Keeper 7‘ article, published before COP 26 started, I now conclude that COP 26 delivered exactly what it was supposed to do, also given who would be there and what factual basis was excluded right from the start and making Net Zero a perfect sham. Find all that back in edition 7.

This image (thanks to Jan Bom) popped up while COP 26 was on, and it seemed to me to be a perfect picture of the current conditions on earth. We have a lot of everything, but some have so much that they choke on their wealth. That wealth doesn’t go where it’s needed. So there is cocooning, standstill, no trickle-down, and you can’t expect help from those you don’t take with you, with those you don’t share with. You will die a slow death.

During these two weeks of COP 26 I had many conversations on what’s the status now and what’s really needed. Some of them were showing the devastation and disillusion that people are in. Here’s a copy/paste from these exchanges and some of my remarks in which I sketch some of the arguments for the move to a regenerative and distributive economy, the first one is a sort of overarching ‘theme’:

‘The great challenge of this century is not to bring together technology and money = COP 26, it’s bringing together humans and Gaia (again), to end the illusion of separation and open minds and hearts to understand interbeing!’

‘I refuse to think more and more in the mainstream here and now, it blocks, no … kills, most innovative potential. In the meanwhile I see the building blocks of a true regenerative and distributive economy arise through thousands of regenerative hubs all around the world. The old normal is in full collapse, it just can’t see the new normal! So, as a consequence, I just put no more energy in hospicing the old ;-).’

‘The road ahead will be rough, tough, brutal. I have seen many shitholes on the planet over the last 30 years, and COP just showed us (again) that current institutions can’t solve this. So why keep clinging on to them? It’s wasted energy. But each and every human has a choice helping to midwife the New Normal, and this is where I spend my energy and will continue to do so. I will never stop backcasting from a possible ideal, whatever small the chances are for success ;-). It is the only hope I have. It’s person by person, regeneration hub by regeneration hub, until the old is obsolete. Or we will all be obsolete.’

‘Many refuse to see the current failure, I accept it. And that is where real opportunity for regeneration begins!’

‘I am a strong believer in tipping points that need 3-10% to help making the switch. That’s where my energy goes! It doesn’t have to be ‘magical’, there is a certain (while low) ‘logic’ chance we’ll get there. I’ve chosen sides just to bundle my energy.’

If COP 26 clearly told one story that touches each and everyone of us it’s this: we need to now all choose sides, less degeneration or regeneration. It’s a 0-1 decision. There’s simply nothing in between!